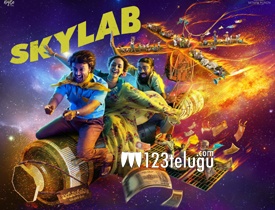 Skylab is a film that has been promoted a lot in the last few days. The film starring Satyadev and Nithya Menen has been released today and let’s see how it is.

The film is set in 1979 amidst a remote village in Telangana. This is also the time when a US-based satellite fails and its debris is all set to fall on this small village in Telangana. How the characters played by Satyadev, Rahul Ramakrishna, and Nithya Menen get affected and how their world changes due to this news form the basic story of the film.

The story of the film is quite unique and has been set up quite well in a small town. The characters and their ideologies have also been etched well by the director. The camera work and small-town endearing visuals are good.

Satyadev plays a doctor and he is good in his role. His body language and the eagerness needed in his role have been superbly showcased by Satyadev. Tanikella Bharani, the lady who played Rahul Ramakrishna’s grandmother was quite impressive.

Nithya Menen is amazing in her tailor-made role as an author. She has slimmed down and does a good job and drives the film. Rahul Ramakrishna is also neat in his role who is bound by family issues. All his scenes with Satyadev are impressive, to say the least.

Though the story and characters are honest, the narration is where the film falters big time. The story does not take off until the interval point and this makes the first half boring.

The director takes way too much time to establish the various stories in the film. Though he had a good scope to elevate emotions and solid comedy, he misses out in a big way.

Barring the last ten minutes, the characters do not have much emotional connection. This is where you do not relate to the characters much in the second half. Also, the tension needed when you know your life is going to end is completely missing in all the characters.

The production values are good and the BGM is also neat. Camerawork needs a special mention as the small town visuals are showcased well. The period backdrop is shown well by the able production design. Editing is bad as at least fifteen minutes in the film could have been chopped off.

Coming to the director Vishwak Khaderao, he has done a poor job with the film. Even after having a solid premise, good actors, he could not generate the punch and made this film slow and boring.

On the whole, Skylab is a film that has an honest story and a good premise. But the narration is dull, lacks sheen, and makes the proceedings lethargic. The slow pace is also one of the drawbacks and gives the proceedings an art film kind of a feel. Finally, Skylab would have been a decent OTT watch but for the big screen, it ends as a painful watch, to say the least.